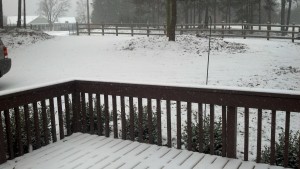 Unless you haven’t turned on the TV or been on social media, you’ve probably seen the news about the massive (haha) snow storm that shut down the city of Atlanta and caused Georgia to issue a state of emergency last week.  Yep, two inches of snow caused people to abandon their cars on the interstate, kids to stay at school overnight, commuters to walk miles to get home, and more commuters to spend 10 plus hours in their cars driving home.  The stories go on and on…  The roads from the sky looked like a scene from a zombie movie.

You can learn some lessons from this major winter event in the south.

Preparedness.  Atlanta was definitely not prepared for what they got.  Forecasters and city officials are now disputing whether it was in the forecast for Atlanta to get snow.  But, it’s wise to expect the unexpected.  Of course, in Georgia’s defense, they just don’t get snow that often!!  No matter what the emergency is you must be prepared both personally and professionally.  You’ll want to make sure that you have your contact list available in case you lose electricity and can’t get on your computer.  You should also have backups of your computer at an offsite location.  I use Carbonite which does a backup automatically every evening.  What other emergencies could happen that you should be prepared for?  Remember, expect the unexpected.

Mass exodus.  Another problem that Atlanta faced was businesses and schools closing early – all happening at the same time.  Atlanta’s traffic is bad on a good day…I don’t even want to think about bad days!  Mass exodus in your business could happen when you have several clients leave at the same time.  This is why you should always be marketing.  Your business may be full at the moment and you think, “I don’t need to market as much right now, so I’ll cut back on social media.”  Nah.  You should continue your marketing efforts so you have prospects in the pipeline when you have an opening.

Be calm and flexible.  Things became unraveled in Atlanta when people began making their way home… and many soon realized they weren’t going to get there. Some sought alternate shelter, others stayed put.  Things don’t always go the way you plan.  There are days it seems like no matter what you do and how well you plan, there’s an unexpected bump – or barrier – in the road.  I had this happen just last week — as a matter of fact, the day the snow started.  Every single thing I tried to do gave me an unexpected curveball.  The key is to stay calm, be flexible, and go to Plan B, C or D…  Take a deep breath (or maybe several deep breaths).  Come up with another plan.

Learn from your mistakes.  We all make mistakes, some are bigger than others – like Atlanta not paying attention to the forecast and taking action too late.  But the important thing is to learn from those mistakes and do things differently next time.  Albert Einstein said the definition of insanity is doing the same thing over and over again and expecting different results.

Share below your thoughts on the January 2014 snow storm in the south and what lessons you learned to apply in your business.

While it’s not particularly flattering to admit, we all tend to seek approval from others. Being an … END_OF_DOCUMENT_TOKEN_TO_BE_REPLACED

After publishing our most recent post on Messaging and Content Marketing, it occurred to us that we … END_OF_DOCUMENT_TOKEN_TO_BE_REPLACED

When it comes to your marketing message, getting it right is as important as any other area of your … END_OF_DOCUMENT_TOKEN_TO_BE_REPLACED

Episode 235 Craig Cody Can I Write It Off? Hosted by Jama Bryan Strategic Business Building … END_OF_DOCUMENT_TOKEN_TO_BE_REPLACED